Back when I had time to blog, I’d occasionally write quick comments about popular topics circulating around the Internet, usually highlighting one article, essay, or video in particular that had an especially interesting or useful take on said issue. I labeled the posts “Clickworthy,” and if you search for that tag, you’ll find them.

If you follow me on Twitter (which you should!), you know that the Clickworthy principle captures most of what I do there. But alas, 140 characters doesn’t leave much space for introspection (or even a summary).

So, in the spirit of the overused year-end list, I have combed through a year of Tweets to present to you a lists of links that promise to be entertaining, informative, sometimes both, and occasionally neither. Without further ado, What was Clickworthy in 2013.

END_OF_DOCUMENT_TOKEN_TO_BE_REPLACED

For the second straight year, my fantasy baseball team sprays fake champagne and lights up faux cigars in celebration of a fictitious trophy. It was a dominating year, until injuries threatened our championship hopes. But thanks to deft roster management, forsaking real friends and real responsibilities, we are again victorious.

I’d like to thank Adrian Beltre – your real team may be fighting for its Postseason life, but take comfort in knowing you’re already a champion (and that you can hit home runs on one knee). Robinson Cano, I’d pay you and Jay-Z 300 million Monopoly dollars to stay with my imaginary team. Matt Harvey, nobody thought you’d be a Cy Young contender (or even knew who you were)… but I knew I was drafting greatness.

And let us not forget Craig Gentry. You’ll likely never be relevant again, but in fantasy land, you were the perfect pickup for the final day of the season. Thanks for the stolen bases.

A special thank you to the real-life Twins and the Astros. Your horrendous lineups made stars of even my worst pitchers (when’s the last time Scott Kazmir won anybody anything?).

I’d like to thank my loving girlfriend, who has stood reluctantly beside me since before my first fantasy nerd blog post two years ago today (the blog post, I like to think, spurred my current winning streak). Without the use of her iPhone, my team might have never escaped the semifinal round. I still hope to enter my waiver claim one day, and have her join me in rotisserie bliss. She, meanwhile, tries to get me to play some Harry Potter game on the Internet. I tell her that I don’t have time for that fake stuff, at least not while I’m proposing trades to my nearest rivals, “The Flying Pancakes” and “Mr. Balls.”

Finally, as athletes are inclined to thanking the true God of the universe for their actual sporting victories, I express my deepest appreciation for the blessing of the Flying Spaghetti Monster – a fake deity fit for a pretend game.

The offseason begins tomorrow. Five-plus months to build meaningful relationships*, advance professionally**, and improve upon my draft strategy to ensure a 3-peat in 2014. 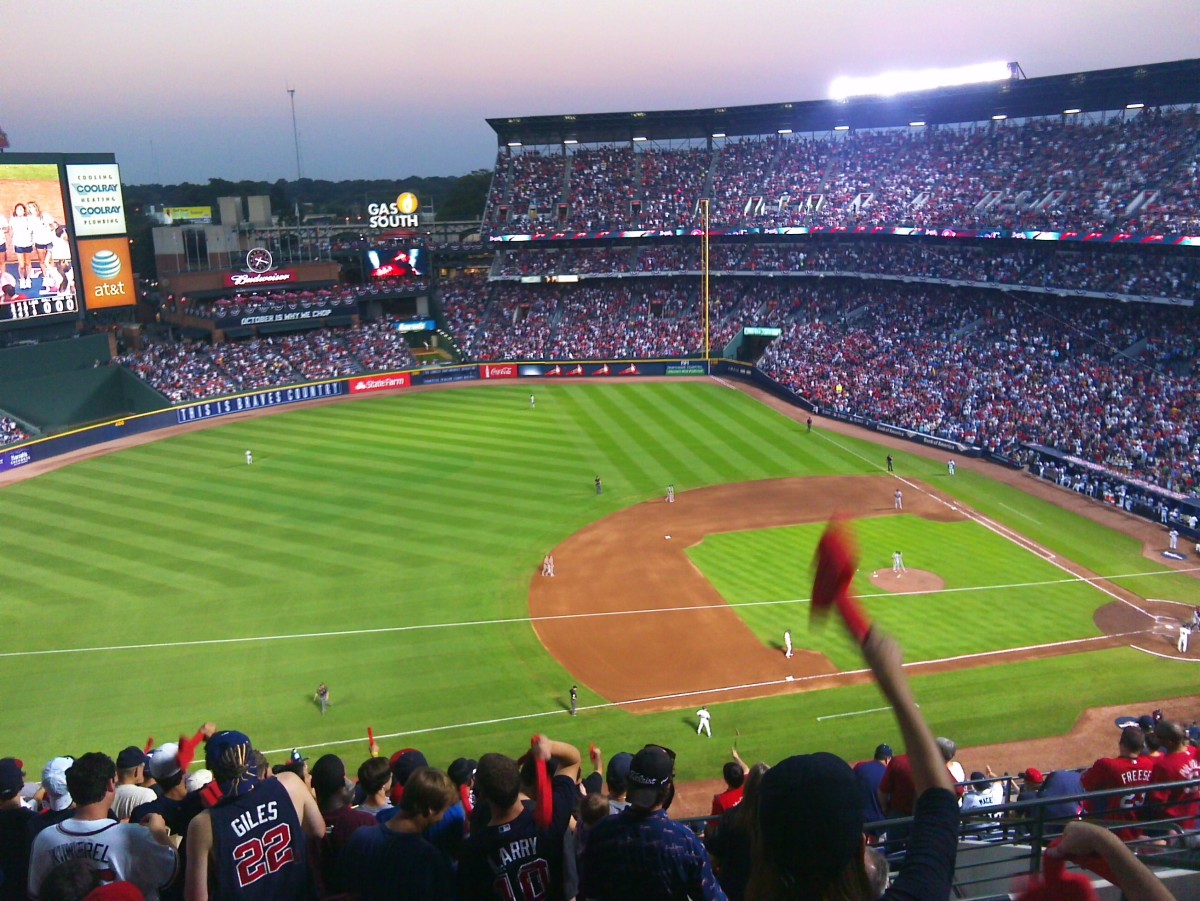 I was at Turner Field in Atlanta Friday to watch the St. Louis Cardinals defeat the Atlanta Braves 6-3 in the first-ever Wild Card Play-in Game as part of the newly designed MLB Postseason.

The Braves played a terrible ballgame. They committed three errors, each leading to Cardinal runs. St. Louis managed only six hits, but scored six runs – four of them unearned. Atlanta, meanwhile, racked up 12 hits, but managed just three runs, leaving 10, 12, 18, 21 runners on base, depending on where you look (seriously, is it that difficult?).

Then, “the call” was made by left field umpire Sam Holbrook in the bottom of the eighth inning – the common sense-defying, if not rule-defying application of the infield fly rule to a ball landing in the outfield some 225 feet from home plate.

How Holbrook could reason that St. Louis shortstop Pete Kozma was exercising “ordinary effort,” or was “in position” to catch a ball he couldn’t see, or, to the casual observer, was anywhere near the infield, is beyond me. How Holbrook could think that the Atlanta baserunners were in any danger of being deceived into a double play and would be aided by his raising of an index finger less than a second before the ball hit the grass is again unfathomable.

How Holbrook could feel inanimate being relegated to calling fair or foul balls down a chalk line in the outfield; how he would desire to do something, even if it was out of his jurisdiction… that makes a little more sense.

But none of that merits a blog post, either.

Is the Wild Card Game right for baseball? Chipper Jones prophetically stood out against it just two weeks prior to the game being his last:

You say to yourself, we could possibly have the second- or third-best record in the National League when the season’s over and we have to play a one-game playoff just to get in, that doesn’t seem fair because anything can happen [in one game]. Now if you were to say the two wild-card teams will play a best two-out-of-three [series], I’d be OK with that. We play three-game series all the time, and we concentrate on winning those series all the time. I think it’s more fair from a standpoint that anything can happen in one game — a blown call by an umpire, a bad day at the office … at least in a two-of-three-game series you have some sort of leeway. [emphasis added]

Well before last night, I had sided with Jones. You don’t follow a 162-game regular season with a best-of-one playoff round. More than any other sport, the series is essential to baseball. Even a bad team can have one dominant pitcher capable of winning one game. Winning the Postseason rounds that follow require more complete teams than a one-game play-in can adequately determine.

But it’s great for ratings. And attendance. I don’t know if I would have made the drive to Atlanta for a Divisional Series contest. Knowing that I would see a definitive outcome at the end of that one game got me to the ballpark. Wild Card Play-in: Bad for baseball, but I loved it in person. The claim of hypocrisy is self-evident and duly noted.

But again, though my word count is getting there, none of this inspired me to write.

END_OF_DOCUMENT_TOKEN_TO_BE_REPLACED

In a society whose entertainment is increasingly Web-centric, it was only a matter of time before technology caught up with our desire for streaming video anywhere, anytime. For most, that now means Hulu and Netflix. For sports fans, the next generation arrived with ESPN360 ESPN3 WatchESPN (Reliable service; inconsistent branding). Loads and loads of sporting events from the worldwide leader. Stuff that was airing on ESPN or ESPN2, plus tons of smaller college and second-tier sports not televised anywhere. Watch it live, watch a replay, watch on your computer, on your TV, on your phone. The future is now! Unless:

“We’re sorry, this game is not available in your area.” 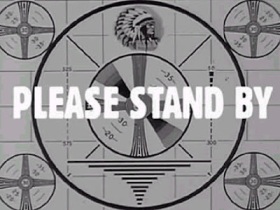 Ah, the regional blackout. Designed to protect television and radio networks from hemorrhaging audience share to competing outlets, thus insuring lucrative broadcast rights, blackouts are part of making the games work financially for all parties. Traditionally, it kept national broadcasters from airing games in the two teams’ hometown markets. So, if ESPN wanted to nationally televise a game between the Tampa Bay Rays and the Detroit Tigers, they can do so. But, folks in Florida and Michigan wouldn’t be able to see the ESPN broadcast, because local television contracts require that the hometown broadcast be the only show in town. Same thing for the NBA, NHL, and major college athletics. There are exceptions, but you get the general principle.

(The NFL blackout policy is much worse. Comparable to a ransom, it further requires a team to sellout its stadium before a game can be televised in that team’s home market. You want TV? Buy up our outrageously priced tickets. At times, it has led to TV stations and advertisers buying up remaining seats at the league’s 72-hours-to-kickoff deadline.)

The Internet messed this up. People are becoming more accustomed to receiving content whenever and wherever they please. And they can… except when it comes to sports, where the old blackout rules carried over into the digital age.

END_OF_DOCUMENT_TOKEN_TO_BE_REPLACED

It was early Sunday morning. I grabbed some raisin bread and a banana and sat down in front of the television. Nothing prepares me for church like listening to people bicker about politics. But instead of meeting the press, I stumbled upon a piece on CBS that sent me down memory lane to old warehouses and hotel conference rooms, digging through dingy cardboard boxes, looking for loot to add to the oversized green plastic box I stored my treasures in until I grew old enough to realize how silly it looked to carry with me.

Some were colorful and metallic, others clean and crisp. Some were cut with the precision of a laser, others embossed, others glossed. There were the Diamond Kings and the diamonds in the rough, but it took mining the entire field to find all of the gems. And if you were lucky, you’d find the one that came with a stick of chewing gum.