Want to be the first to read the Weekly Rundown? Subscribe to email updates by clicking the “Follow” tab at the bottom of your screen (or here if that’s not working for you). You can also add to your RSS reader.

Muhammad Ali died Saturday night. If you only knew him as a boxer, I hope you’ll take all the tributes as an opportunity to learn more.

The news broke as I was finalizing this week’s rundown, but people more attuned to great sports writing have been curating your must-reads. I recommend this list from Don Van Natta and Jacob Feldman’s Sunday Long Read newsletter.

From a sports media perspective, ESPN did something I can’t recall seeing before. They went live in the wee hours Saturday with their top journalistic talent. Bob Ley and Jeremy Schaap anchored a SportsCenter that was relaxed in pace, letting both men and their guests share longform stories about Ali. Deadspin, who loves to hate on the Worldwide Leader, offered praise, and captured a 12-minute segment for you to watch. SI’s Richard Deitsch has the behind-the-scenes look at how the late-night broadcast came together.

This probably isn’t your first time to see the photo at the top of today’s post. It was taken by Neil Leifer for Sports Illustrated in 1965, and remains one of history’s most iconic sports photographs. Many stories have been written about it since. Here’s a longread by Dave Mondy published about a year ago that explores the photographer and the fighters he captured. END_OF_DOCUMENT_TOKEN_TO_BE_REPLACED

Hulk Hogan’s legdrop on Gawker is tainted by outside interference, Baylor gets busted, the Buffalo Bills block beat reporters, and SEC fandom exposes problems for a local newspaper following a media conglomerate’s process. That, plus paying to sit at a park, that guy with the water bottle, and more.

Summer means my return to semi-regular blogging! Join me as I experiment with a weekly rundown of stories I found interesting.

Was Hulk Hogan a pawn in a billionaire’s vendetta against a media company? It’s not a wrestling storyline. This week, we learned that Hogan’s lawsuit against online tabloid Gawker was anonymously financed by Peter Thiel, a venture capitalist who was a co-founder and CEO of PayPal and sits on the Facebook board of directors. Why? Because Gawker outed Thiel as gay in 2007. END_OF_DOCUMENT_TOKEN_TO_BE_REPLACED

As someone who studies media, I was fascinated by local coverage of Hurricane Katrina. Television stations in the affected region began broadcasting uninterrupted coverage ahead of the storm, and many continued for almost a week afterward.

The situation was particularly unique at WAPT, the Jackson, Miss. ABC affiliate (which, full-disclosure, I would later work at for a brief time). The night before landfall, they welcomed sister Hearst station WDSU from New Orleans, and for days, the two news teams covered two cities on one network.

Hearst issued this release in September of 2005, describing the scene at WAPT and in Jackson generally. It doesn’t appear to be available online anymore, so for the 10th anniversary of Katrina, I’m reposting it below:

It is Wednesday …the first Wednesday after Hurricane Katrina ravaged New Orleans. There is a frantic energy in the air and the halls are crowded at WAPT in Jackson Mississippi, where there is no running water and phone service is barely operable. I turn the corner walking swiftly toward the WDSU makeshift newsroom, and there I see the story of Hurricane Katrina in a microcosm. Longtime New Orleans anchorman Norman Robinson, a rock of a man in personality and stature, is crying uncontrollably. It’s his 8-year-old granddaughter. He can’t find her. She is the light of his life, and she was staying in an area damaged by the storm

And so goes another day in the new world of WDSU-TV, Hearst’s New Orleans television station. Reporters, photographers, producers, technicians all covering a story that dramatically impacts their own lives under working conditions which can best be described as primitive. Forced out of their home base by the threat of rising floodwaters and a tide of violence, the television station never stopped broadcasting, whether it was over the web or over the air. Seven days a week, 24 hours a day. This coverage re-creates the meaning of service to the community.

END_OF_DOCUMENT_TOKEN_TO_BE_REPLACED

Ten years ago, we came together.

I am a weather nerd. As a kid, I pretended I was covering severe weather from my bedroom (and sometimes the front yard in the middle of a monsoon). I learned about latitude and longitude tracking hurricanes, copying coordinates from The Weather Channel onto a photocopied map. In elementary school, I visited not one, but two of the local television meteorologists.

Storms frightened me and yet I was drawn to them. I swear I was destined to be a weatherman until I discovered how many calculus courses they have to take (College Algebra put a strain on this brain).

The 2005 Atlantic hurricane season remains the most active on record, with 28 tropical storms – so many that the list of names was exhausted, leading to six storms named for Greek letters, including one forming in December and another in January of 2006 – the latest on record. There were 15 hurricanes, 7 major hurricanes (Category Three or greater), and 4 Category Five hurricanes… all records. The strongest hurricane that season was also the strongest ever recorded in the Atlantic (and, no, it’s not the one you are thinking).

The first forecast models for Katrina predicted a weak hurricane brushing the Florida coast and turning off into the Atlantic. Instead, Katrina went through the peninsula and into the warm waters of the Gulf of Mexico. And when it finally did make its northern turn, it was toward the Gulf Coast.

END_OF_DOCUMENT_TOKEN_TO_BE_REPLACED 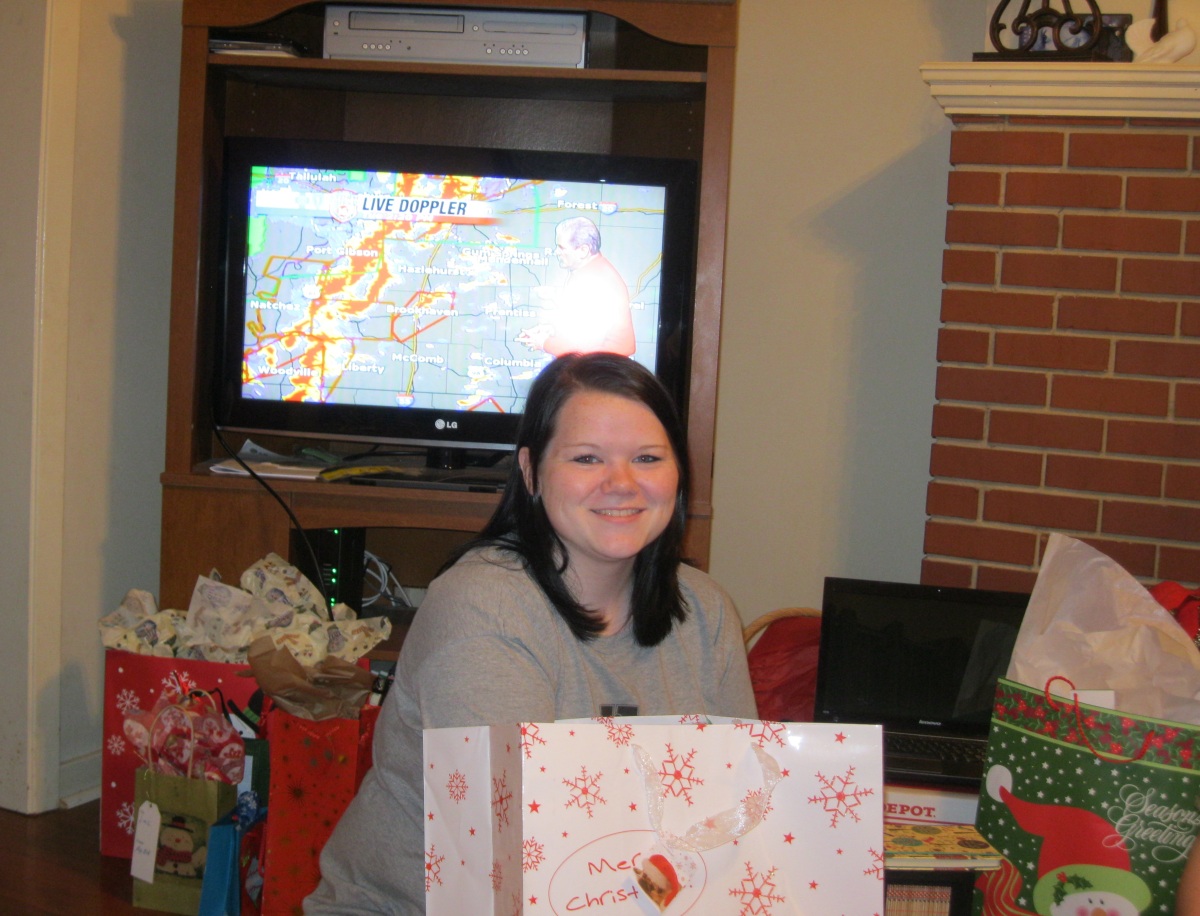 Driving home for Christmas, I was doing my best to get into the holiday spirit by listening to carols on the radio.

Have a holly jolly Christmas
It’s the best time of the year.
Well I don’t know if there’ll be snow
But have a cup of –

If you traveled across the Deep South on Festivus, you likely encountered similar conditions. While the carolers on the radio were content to Let It Snow, I was thankful I remembered to replace my windshield wipers that morning, lest I drive off the road and into the lake… which was quickly becoming one with the road.

Rather than tales of the glories of Christmases long, long ago, my family back home manned their laptops and smartphones to find out exactly where the storms were and whether I needed to stop, detour, or push the pedal to the floor.

On a winter day in the South, you could have an ice storm, a tornado outbreak, or just about anything in between. Christmas in particular has been an active time as of late. Last year, in spite of our generally cold winter, Christmas Day was so warm that the jackets were traded in for t-shirts and shorts. The year before, Santa arrived just ahead of a tornado outbreak/blizzard, producing this colorful array of watches and warnings. END_OF_DOCUMENT_TOKEN_TO_BE_REPLACED