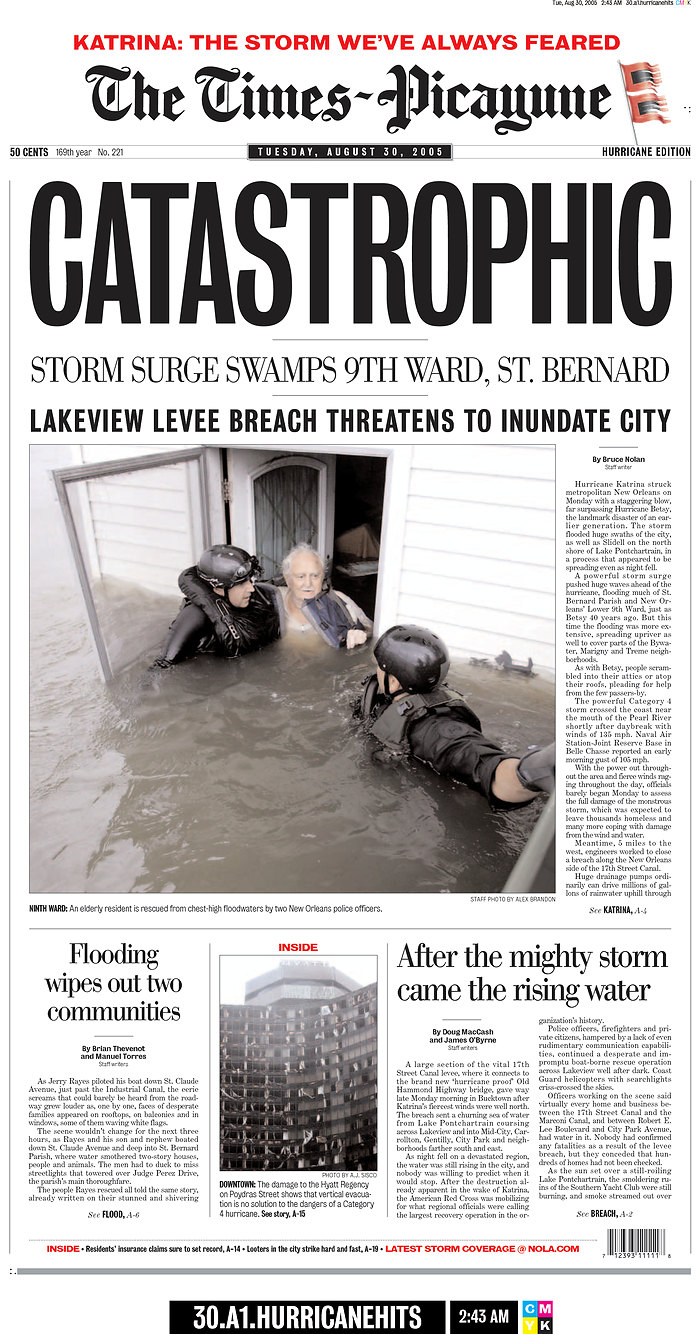 Today is another in an almost decade-long line of sad days for the newspaper industry. Ownership of the New Orleans Times-Picayune announced Thursday that the newspaper will cut its print distribution to three days a week and shift resources to its website, NOLA.com. By the end of the afternoon, three more dailies in Alabama had been similarly downsized.

This is not just another small newspaper trimming down, or a competing paper in a large city getting out of the print business. With a daily circulation of over 150,000, the Times-Picayune is the largest newspaper to scale back printing dates and New Orleans is now the largest city in America without a daily newspaper, according to Poynter.

The move is part of a larger strategy for the newspaper’s ownership group, Advance Publications (often referred to as Newhouse, after the family that owns the company). Hours after the Times-Picayune news, Advance announced the same print schedule for the Birmingham News, Press-Register of Mobile, and the Huntsville Times – leaving three of the state’s four largest cities without a daily newspaper. The Alabama newspapers will place more emphasis on AL.com. Advance also recently consolidated a number of their Michigan newspapers and decreased printing days, eliminated home delivery, or took both measures in various markets.

Matthews was installed at the Times-Picayune by Advance following the retirement of longtime publisher Ashton Phelps Jr. in March. He came from the Press-Register.

Job cuts will come as part of the digital shift. The Times-Picayune’s editor, Jim Amoss, will initially oversee the group’s news platforms, but he, along with two managing editors are expected to leave the paper, according to New York Times media reporter David Carr, who shared leaked information about the cutbacks Wednesday night. (The Birmingham News will also lose editor Tom Scarritt in the transition, according to a Twitter post by business reporter Michael Tomberlin.)

Weird part about digital-first change at Times Pic? They have always excelled in print and been horrible on web. A pivot to weakness?

Both NOLA.com and AL.com recently underwent a much-maligned redesign (as a general rule: newspaper folks are great at print layouts, terrible at web layouts – two completely different artforms). And indeed, the news content is pretty substandard – which is to say, on-par with most online newspapers.

Here’s what is more important, and more market-specific – New Orleans as one of the most poverty-stricken cities in America (somewhere between 7th and 14th depending on what list you look at), is one of the least-wired. Almost 40% of the city’s residents do not have Internet access, according to a 2010 Kaiser report (warning: large PDF file). An inordinate amount of the population cannot comfortably access the expanded online content in the first place.

New Orleans is a tradition-rich city with an active nod to history. Newsstands and coffee shops long overtaken by hipsters with laptops in other parts of the country are still a big part of the morning tradition in the Big Easy. Enter Café du Monde in the Quarter or Morning Call in Metairie and you’ll still see a room full of businessmen and women enjoying coffee and beignets while reading the Times-Picayune.

A city that saw its population plunge south of 200,000 post-Katrina maintains a 150,000+ daily devotion to its newspaper of record, closer to 200,000 on Sundays. That’s  a paper that has become intertwined with the culture.

Of course, the move is economic in nature. Advertising dollars in general – in print, particularly – are abysmal since the 2008 fiscal nosedive. An online presence is much cheaper to operate (hey look, I have one, too!) and, when done correctly, can have major reporting advantages over print. It’s also probably true that the Monday and Saturday papers shouldn’t exist in any market outside New York, Washington, Chicago, and L.A. How thick is your Monday paper? And how many of the stories are AP rewrites (or worse, straight reprints)? It wasn’t always that way, but newsroom cutbacks take their toll, especially on a Sunday news beat.

I understand the digital shift. It does, and will continue to make sense for news outlets. But I’m a traditionalist. I was raised by the last generation to value a morning with the printed paper, and I guess it rubbed off on me – just like the ink from the piece of broadsheet my thumb pressed upon while reading something comfortable, easy on the eyes, and tactile. If communication is a sensory event, and memories are built by touch and smell and sound and sight – well then it’s no wonder I prefer the printed page to the glowing screen.

New Orleans will miss the Times-Picayune as it once was. More so than the cities sure to join them as progress pulls us out of old habits. (Indeed, it only took a couple of hours.)

This story was updated to include the changes to the Alabama newspapers.