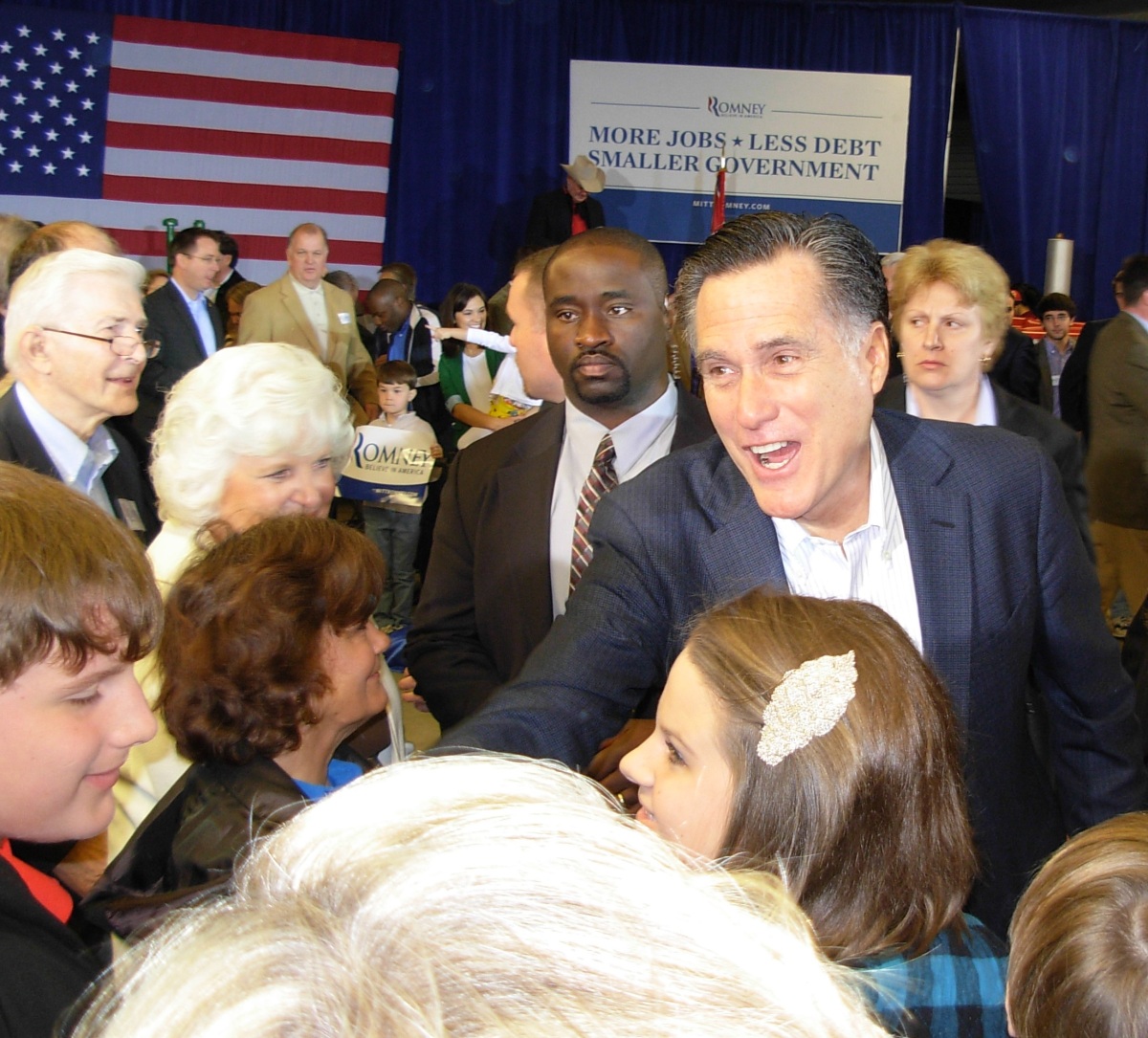 Mississippi rarely receives much attention from candidates in presidential elections. After all, there’s usually little doubt as to the inclinations of the most conservative state in the union. Furthermore, with its primary scheduled after Super Tuesday, party nominees usually have been all but officially accepted by the time the Magnolia State rolls around.

All three men made stops in Jackson. I managed to see two of them in person – Santorum and Romney – while collecting a handful of reliable reports on the Gingrich events. As polls show a tight race going into the primary, each candidate used a different strategy to court voters.

Late to the show

Rick Santorum was the first candidate into town, and also arranged the best time slot to make his stop. The rally was held on a Wednesday night at the Mississippi Agricultural and Forestry Museum. Chalk it up to primacy, the primetime slot, or decent support in the polls, but with around 400 in attendance, Santorum’s rally was the largest of the three. 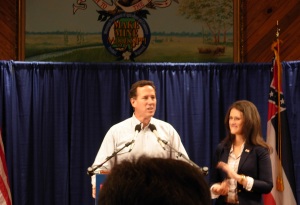 The setting worked to Santorum’s advantage in other ways. The Sparkman Auditorium was just large enough to fit the crowd, leaving no empty space. It was a rustic log cabin, which fit well with the candidate’s message of simplistic governance (and his casual dress – checkered button-down, no tie, no jacket). A good job of planning and projecting by his campaign team.

The audience had to bear with an hour-plus delay prior to Santorum’s arrival, but seemed to be in good spirits. There were a surprising number of young voters in the crowd, as well as a large number of undecideds. The people I spoke to echoed sentiments of 2008 – they couldn’t relate to any of the candidates and wished they had another option. Nevertheless, the “anyone but Obama” mentality survived; even the least-liked Republican would be chosen by these voters over the incumbent.

That said, there was some significant vitriol aimed at the other Republican contestants, namely Newt Gingrich. Santorum supporters, and even a few of the undecided voters, expressed their desire for Gingrich to drop out of the race, pointing to his poor performance thus far and negative campaigning against the more likely nominees in front of him.

Santorum’s speech was extremely heavy on emotion. Abstract concepts of freedom and the strength of the common man outweighed specific policy.

“Is [the election] about jobs?” he asked. “Is it about the economy? Is it about security?”

No, Santorum concluded. The question was far simpler.

“Are we going to be the generation that keeps America free?” he said. “If we don’t win this election, I fear we will lose that freedom we’ve had for 200 years.”

He constantly referenced his Christian faith – a plus in a highly-evangelical state. Early in his address, Santorum responded to a remark by the Romney team that it would take “an act of God” for anyone but their candidate to win.

“I don’t know about you Governor Romney, but I think it was a blessing and an act of God for us to even be on this stage tonight, and I thank God for that,” Santorum responded. 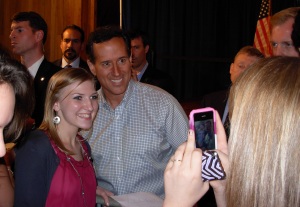 “We’re connecting,” he continued, “Not because everyone agrees with what I’m saying, but people know what I’m saying is what I truly believe is right for this country.”

Later, he turned his focus to Obama, but maintained a similar theme.

“We don’t need any more presidents, or presidential candidates, sharing messages that have been poll tested,” he said. “We need a president who will speak from the heart.”

In his conclusion, Santorum explained the stakes in Mississippi, and outlined his campaign’s only hope for victory:

After slipping behind the curtains to conduct a live interview with Fox News’ Greta van Susteren, Santorum returned to the crowd for an extended meet-and-greet. Being his last stop of the day, Santorum had more time than his opponents to interact with the public – also probably his greatest strength.

Dancing the night away

Thursday morning, Newt Gingrich held a rally at the Hilton-Jackson. Scheduled for 9 a.m. on a workday, the audience was far smaller than the other events that week (I was among those who could not attend). Sources at the rally estimated attendance of fewer than 100. The number of media and staffers outpaced the general public, one rally-goer told me, only half-joking.

To appeal to such a similar bloc of voters, Gingrich and Santorum couldn’t be more distinct in their public speaking. Whereas Santorum relied heavily on pathos, Gingrich, ever the debater, outlined policy arguments with detailed logic and reasoning. This, again, plays to the candidate’s strengths. Gingrich is a policy hound, but he suffers when voters consider his ethical baggage. That’s not to say he completely ignored likeability – the image that made all of the national newscasts was that of Gingrich and his wife, Callista, sharing a dance in the hotel lobby.

No grits, no glory 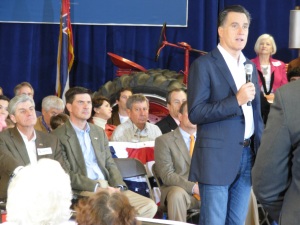 From the moment you walked in, you knew this one was the big one. Bright lights, big political names – an event to see and to be seen (I’d estimate around 300 people there). But it wasn’t just that. Security – loads more than at the other events – keeping a close eye on attendees (and blocking all of the sightlines). Staffers moving and removing people from seats at the theatre-in-the-round-style venue going for exactly the right appearance. Much of the morning address was broadcast live on the cable news networks. Everything had to be perfect, which meant the old couple and the family trying to sit in front of the group of schoolchildren posing on a wagon… you better quit uglying up our image and move it to the back. You, African-American male at a Republican rally, come sit front-and-center for the cameras. It’s how the game is played, but it’s still a frustrating thing to observe.

Romney was introduced by Commissioner of Agriculture Cindy Hyde-Smith and Governor Phil Bryant, followed into the arena by a host of other anonymous importants. He had theme music. But Romney wasn’t all big-time polish. He wanted to let Mississippians know he could relate to them. That’s why, standing in front of not one, but two prop tractors, Romney – going for the casual denim jeans and blazer look – began his speech with a resounding…

He then described his breakfast – “a biscuit n’ some ‘cheesy grits.’”

Here, witness it for yourself:

Okay, so we’re probably being hard on Mitt, but it just goes to show how mightily Romney has struggled with shedding his “out-of-touch rich guy” label.

Romney did not bother with his G.O.P. rivals. Rather, he went straight after the man he would face in the general election. 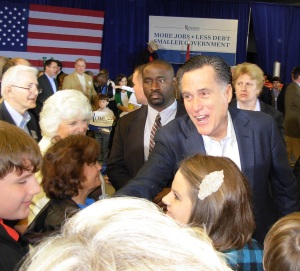 Here is where Romney did relate successfully to his audience. In his criticism of Obama, Romney proved himself knowledgeable of regulations impacting the oil industry in the Gulf, and spent a great deal of time discussing healthcare in a city with a tremendous workforce (and student body) in the field.

In fact, both Romney and Santorum made “Obamacare” a key point, and received their largest ovations for it. Romney claimed he would repeal the act on his first day in office. Santorum gave away the game and told his audience that 75% of swing state voters want it repealed (That’s why the candidates are making it a top priority).

Romney took on a militaristic tone a bit less like the “Massachusetts moderate” his opponents characterize him as. Despite his calls to reduce the deficit, Romney scolded Obama for suggesting cutbacks in military spending. Later, in a Q & A session, Romney was asked about Iran and called the nation “the world’s state sponsor of terror,” encouraging military action against the regime.

The final audience question to Romney (and the only one that wasn’t from a section where seating was being screened) provided something of note. When an elderly man asked Romney who would be his vice president, Romney got the crowd’s approval with a quick-witted, “Are you available?” After that, though, he explained that his vice president would be “someone who can be president.” I couldn’t help but think back to 2008, and the unknown number of votes John McCain might have relinquished 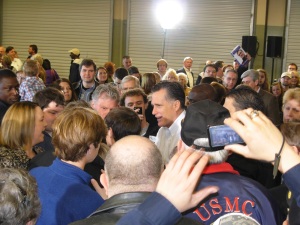 because of worries about his running mate being first in the line of succession.

When the rally ended, it was as if the final notes of a rock concert had been played. Attendees rushed toward the barricades to try to get a picture or a handshake from Romney. It was apparent – even people who didn’t see Romney as the best candidate still saw him as the likely one. Even those who rolled their eyes at his attempts to be Southern still realized he’d be the one with the grittiness to face Obama in November.

The rallies were an excellent experience. A chance to see political theatre play out. A chance to meet an engaged sample of the Mississippi electorate. Simply a chance to be in the room with people seeking the most powerful position in the world. What do they mean? Not much, I would imagine. But in a close race, perhaps seeing up-close the raw emotion of Santorum, the legislative grasp of Gingrich, or the coordination and strength of Romney was enough to engage some previously undecided voters. For what it’s worth, I think Santorum achieves his Southern surge, to the undoing of Gingrich. Romney will settle for close second-place finishes and will keep rolling toward the nomination.

As entertaining as this was for a politico like myself, I dislike this time of year. It’s when Republicans try to out-conservative one another and Democrats try to out-liberal one another. Primaries tend to cater to the most partisan among us, to the detriment of the more centric majority. I compliment any voter who can throw confident support behind a candidate in a time of pandering and grandiose promises that puts the general election to shame. Ron Paul fans, at least you’ve got that comfort. Now, why didn’t you bring the good doctor to Mississippi? That would have been a rally.